Rumor around the Sciacca house is that I’ve been totally Bogarting the Netflix queue lately. I mean, sure, the latest batch of films MIGHT have included things like Captain America (liked the long, backstory opening, but it just kind of plodded alog), Of Gods and Men (holy CRAAAAAP was this thing stunning in its capacity to bore! What about “historical drama relates the ordeal of seven French Trappist monks in the mountains of Algeria who are taken captive by Islamic fundamentalist” made me think this wasn’t going to be a grueling snoozer? I managed to gut it out – barely – but it took several drinks and left me feeling compelled to apologize to my projector AND screen. And that is 2 hours and 3 minutes of my life that is never coming back!), Hanna (adolescent girl trained super assassin? Yeah. I’m in!), X-Men: First Class (really liked it. Like a lot. Like I *really* liked it *a lot* I’m fascinated by the whole Cuban missile crisis thing and I liked how that weaved that in), Transformers: Dark of the Moon (slightly more exciting than the Trappist monks what with the near constant explosions and robot mayhem, but this movie had just slightly more plot than sitting in a room while bright colored lights strobe rapidly on and off to a syncopated bass track) SuckerPunch (a movie that I fear has GREATLY exaggerated the level of hotness of chicks and their ninja-karate weapons skills amongst the mentally insane. And – spoiler – the ending scene of Don Draper given the chick a brain-chisel lobotomy? No, that’s not a giant DOWNER at all!), and Thor (which had WAY more alternate universe, astrophysics, wormhole travel than any movie called “Thor” has any right to. And, honestly, if there is ANY universe where an astrophysicist actually looks like Natalie Portman, I think that universe *would* implode!).

So, yes, I can *maybe* see how some of those in my house – Dana – would think that the latest batch of films would not be the most Dana-esque selections. So, after another tearing open the little red envelope and finding yet another non-Dana film – Fast Five, a film that I’m sure has been the final-straw in more relationships and decision making processes than most other films in modern memory – she Force-guilted me—clearly a Dark Side Female Force power –  the other night into making sure that Jane Eyre was moved to the tippy-top of our queue. She even looked over my shoulder as I did it to insure there were not queue shuffling shenanigans. “Whoa! I have NO IDEA how all those Chuck Norris, Clint Eastwood, Stallone, and Schwarzenegger films got added to our queue ahead of that? Crazy, huh? Seriously, I have NO IDEA how that movie kept getting pushed down to the number 19 position. Well, what can you do?” Really, who understands how to manage a Netflix queue? (Shut up, everyone!) I’m just blaming this on Reed Hastings, probably part of his new plan to push Netflix stock down into the $50s.

Now, I generally don’t mind watching period films or “chick flicks.” For the most part I’m happy just watching ANY movie as it usually involves quiet time sitting and drinking. And usually the production values are considerably higher and the post film-watching shame significantly lower on these films than, say, anything put out with Adam Sandler or Rob Schneider in it. Usually the conversation prior to viewing will go one of two ways.

Dana: “Do you want to watch such and such movie?”

Me: (Barely concealed disgust in my voice.) “NO! That sounds awful! Let’s just watch the TV Guide channel instead.”

Dana: “It has Keira Knightley in it.”

Me: “Oh, yeah! I’ve totally been wanting to see that. Let’s DO watch that!”

Dana: “Watching this movie is going to make me happy. You want me to be happy don’t you?”

So, Jane Eyre arrives the other day and is immediately placed atop the viewing docket. And unlike Pride and Prejudice which I think I’ve seen at least two different versions of – enough times to know that the guy’s name is Mr. Darcy and that no one will EVER POSSIBLY be able to live up to the Colin Firth version – I had no idea whatsoever about Jane Eyre. My assumptions started and ended with the presumption that the movie would probably have at least one girl in it. And her name may or may not be Jane.

Turns out it is pretty much the classic tale of woe and sadness which was life in England in the mid 1800s. A tale as old as time itself. Where our heroine is born into a family with money; she enjoys the privileges of life of means until father marries new wife that hates poor little Cinderella. What with the ever-present bouts of croop, consumption, whopping cough and miscellany skin ailments, the father suddenly dies, leaving all inheritance to the new wife and her dandy-boy child. Our girl is shuttled off to live a life of abject poverty and shunning in an appropriately awful boarding school well – and, really, who hasn’t this happened to? – her best friend dies next to her in the shared twin bed. Of course, like a beautiful flower that springs from a gloppy pile of infected animal feces, our heroine manages to overcome, inherits a pile of money, finds a new and better family and marries the man of her dreams! Tra-la-la and…scene! (Never mind that her betrothed is blinded and homeless due to a fire set intentionally by his locked-away-in-the-cellar-crazy wife. I’m sure we’ll find out more in Jane Eyre 2: Can’t Keep a Crazy Woman Down! And *still* that movie would be better than Transformers3!)  It’s no wonder they called it "Jolly old England!"

The film was well done and mostly kept my attention. They managed to cast a girl -- Mia Wasikowska – where you can just tell that they went to GREAT lengths to make sure that she is the perfect, unbelievable combination of utterly plain, unspecial, unlovable and lacking in any physical beauty, yet still is actually really beautiful. 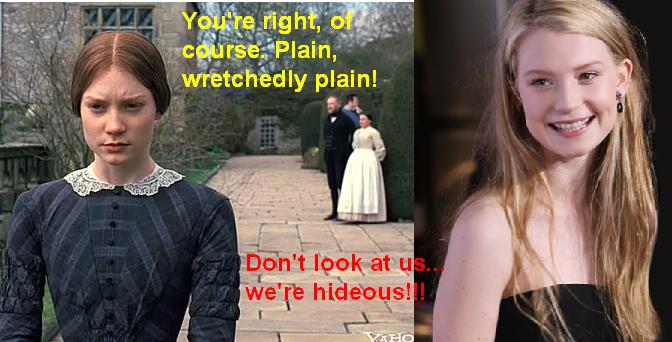 Kind of like how Rachael Leigh Cook was so hideous and unattractive in She’s All That. To me she often looked like a younger version of Cate Blanchett, so, you know, totally plain and wretched. Also, the key to being a successful male in England in the 1800s was clearly a fierce set of mutton-chops and a comely top hat.

One thing that really stood out to me in the film was a statement made by one of the characters to Jane. I even discussed it with people at work and with Dana over dinner. ("How was your day?" "Fine, fine. Enough chit-chat...let's dissect Jane Eyre some more, shall we?")He was offering her a job as a schoolteacher to the village kids or orphans or something. The job was clearly NOT what one would generally consider an upward career move, and it included housing in this kind of stone-walled, wood-floored shack/hut and the princely pay of “15 pounds per year.”

Now, they were saying it like 15 pounds WAS a small, small sum of money but still, to think that someone just 150 years ago could get by on 15 pounds for A YEAR! That’s pretty amazing. As I write this, a pound is worth roughly $1.60, making 15 pounds worth about $24.09. For the year! Nowadays, $24.09 wouldn’t even be an unusually great wage for AN HOUR of work. Think about it…in 150 years, we’ve gone from what people live on in a year to what they make in an hour. That is some crazy, stuff-your-fireplace-with-cash-and-burn-it, inflation! Jane went on to hit the inheritance lottery, getting $20,000 pounds from a long-lost uncle, so of course, it was a happy ending for her.

But that just shows the HUGE disparity of wealth that existed back then; families seemed to either reside in the stratospheric echelon of uber-wealth; living in castles and having hundreds of acres and dozens of servants cater to their every whim and need and throwing giant parties where people ate mutton and flagons of wine and played simple librettos on ever-present pianos and danced and cavorted Eyes Wide Shut style. OR they were forced to churn butter or hand wash clothes in a never-ending cauldron of milky grey water for the Master as they waited around for the next animal-borne disease to come and ravage them and for their teeth to slowly and deliberately turn British.

It was a family/generational thing; you were either born into it, or you weren’t and with very few exceptions could help you rise above your station. (For the wealthy, however, it seemed that peril lurked around every corner, ever ready to dash your fortune and hurl you down to a life of dirty squalor.)

I will admit that I don’t fully understand all of the issues surround the Occupy Wall Street protest. However, it seems that – at the root of things – their contention is not far off from some of the conditions that existed in the Jane Eyre time period:  A very few amount of people have a vast majority of the money, while the remainder have far less. The biggest difference is that back in Jane’s day, there was little one could do to improve their station. A man could join military service and hope to rise in rank. A woman could hope to be beautiful enough to make some wealthy man look past the class boundaries.

The big difference is that today – at least in most societies – almost everyone has the opportunity to better themselves in some appreciable way. For some, that improvement comes through hard work, determination, sacrifice and struggle; believing and investing in one self. Even when that investment is only time and sweat. For others it comes through brains and ingenuity. Finding and solving needs, creating, inventing, continuing to push past limits and reach after the ever elusive “what if?” For others, I suppose, they see their path to improvement through protesting.

When I need help, I prefer counting on myself. I know what I'm capable of achieving, and then I’ve only got myself to be disappointed in. Now, if you’ll excuse me, I’ve got some sweet-ass mutton chops to start working on.

Reply lindsey
3:45 PM on January 23, 2012
Wow, what a great comparison you've made here. But I have to take issue with your second to last paragraph the big difference today is that most people have the opportunity to better themselves.....

I disagree. The point of "Occupy" is that up until recently, most Americans DID have control over their own rates of success through hard work, education, etc. But suddenly that's not true anymore due in part to unemployment being so high, wages stagnating, and the disgustingly high cost of college, to name just a few reasons. If you were starting your career out now, you simply would not achieve the same level of success as you are fortunate to have.