But almost never do I go in to work and truly think, “Oh my God! We could seriously kill someone today!”

So a few months ago we installed a fairly elaborate Lutron Sivoia shade system for a client. A shade that was QUITE expensive. And unlike typical Lutron installs, this one did NOT go off without any hitches. In fact, it had multiple hitches.

The shade was a three part system with a cornice, a Kirbe vertical blind and then a blackout shade behind the Kirbe. The client wanted the shear Kirbe to allow for a little privacy but still letting some natural light in, but wanted the blackout for sleeping in and keeping out some of the afternoon sun on his ocean facing condo.

So I called Lutron, “No, it’s totally obvious! That’s the right bracket; the shades just slip right into it!” And we all looked again. And looked on-line. And fiddled. And after a bunch more time scratching our heads and disassembling and reassembling stuff – and more calls to Lutron and an e-mail pic of our bracket – Lutron sheepishly determined that they had indeed shipped us the wrong bracket and that this was just NOT going to work.

Overnight in a new bracket, return the next day and start back at it. To discover that Lutron had mis-measured the cornice and made it one-half inch too long.

“One-half inch? No biggie, right? Why you complaining? More is better!”

Except this was going into a recessed opening. In a concrete wall. And one-half inch of totally non-flexible wood frame might as well have been a foot too long. So, we consulted with the client who wanted us to just do whatever it took, so we cut out his drywall and chiseled out the concrete just enough to allow the cornice to slide into place and finished with the install.

A few months later the client calls me back. He’d like me to come back and measure for another identical system in his living room. He has a 92-inch Mitsubishi DLP TV (and an 11.3-channel Denon powered surround system!) and he can’t see it at all during the day because of the glare. I go up, take all of my measurements and order the new drapery system. (A drapery system that has a retail price of OVER $12,000 by the way.)

I remind him of the difficulty we had getting the last shade – which was 8 foot 9 inches – into the elevator and that we’ll probably have a real time with the new shade which is 12 foot 1 inches. (Cue ominous foreshadowing music...)

Oh, and did I mention that he lives on the 16th floor of a 19 story luxury condo high-rise on the ocean? Yeah. Cause that part is pretty important.

He says that it should totally fit in the elevator but that if it doesn't, we can take the stairs. No problem, he says, In fact, he walks down them every day for exercise and that it’s really not that big of a deal. I check the stairwell and it looks like it would suck but be doable. (I don't mention that going down is way easier than going up. While carrying a 50-pound box. On three different trips.)

So we order the shades and they finally arrived in three lengthy boxes, probably close to 12-½ feet each. We schedule the install and arrive on site. Just for a lark, we try the elevators. It takes about 1 second to determine that they will NOT be going into the elevator. I even try the old, “The elevator is filling with water! We must escape out the secret top hatch!” thing, but apparently that only works in James Bond and Die Hard movies, because the top of this elevator is one solid, immovable section. Damn.

“Well,” I say, trying to sound chipper to my guys, “we thought we might have to huff it up the stairs. Looks like we we’re gonna have to get to it.”

So we carry the first box to the stairwell and we get to the landing area between the first and second floor and…Houston, we have a problem. The box, she no will fit. Too long, tall, wide to make any kind of Tetris turn around the corner, over the rail, whatever. We struggle for about 5 minutes before it’s totally obvious that this is NOT going up the stairwell.

So, we start thinking. Could we cut the thing in half and then have a fabric person reassemble it in his condo? Maybe. But that will only work if we can get the non-cutable shades up to his unit. So we try the smallest box. And it....almost but doesn't quite fit. "Take it out to the box, maybe?" my installer suggests. "And destroy it while scraping it up 16 flights of stairs?!" I shoot down.

So we start walking around the building. We go to the back and look up. And up. And up the 16 floors to the balcony on the back side of the building. Our thought is that if we can get access to that unit, we can rig some pulley mechanism and hoist this thing up on the back without anyone being the wiser or putting anyone in danger.

So the building maintenance super comes out and says he can get us into that unit, but that after looking at the box, he doesn’t think that we will be able to make the turn into the hallway once we get it up there.

“Do you have any kind of window cleaning rig system up on the roof that maybe we could lower down and use?” (This was actually a joke suggestion from Ken Borg – “Use the window cleaning thing, like in Tower Heist” – but at this point it sounded as viable as anything.) Negative.

But he totally surprises us by saying, “Why don’t you just do it from the pool side? You could set up your pulley on [the client’s] balcony and then have the boxes exactly where you want them. We’ll help you clear out a spot and keep people out of it while you work.”

Sounds good. In fact, it sounds like an unprecedented level of cooperation. So we headed up to the balcony and looked over the rail to take a lay of the land. 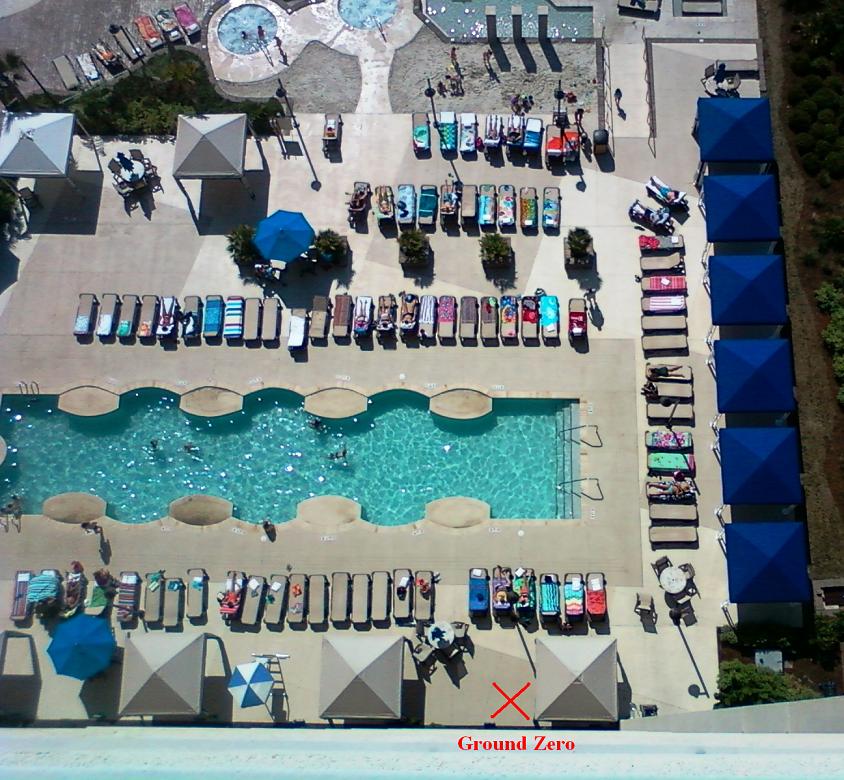 I then sent my guys to Home Depot to buy the supplies for fabricating a custom pulley system that can haul three nearly 13-foot long, 50-pound boxes up 16 floors, or roughly 175 feet. You know, with the absolutely MINIMUM chance of killing anyone in the process. 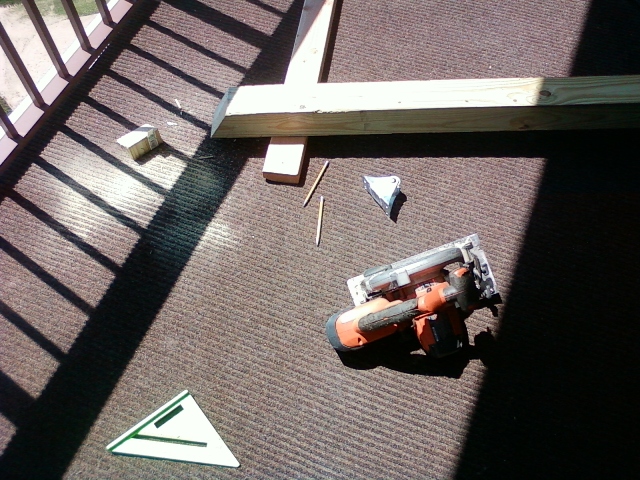 Then we fabricated a strap system to minimize any chance of the rope slipping off the pulley while it was coming up. We were facing the ocean and it was pretty breezy and if the box somehow slipped off the pulley halfway up…well, I didn’t want that to happen. 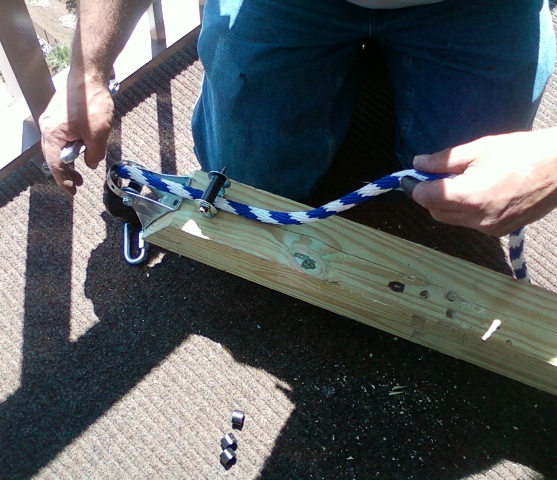 Then we attached the 2x4 to the bottom of the 4x4 to block it against the railing and slid “The Beam” out into space. 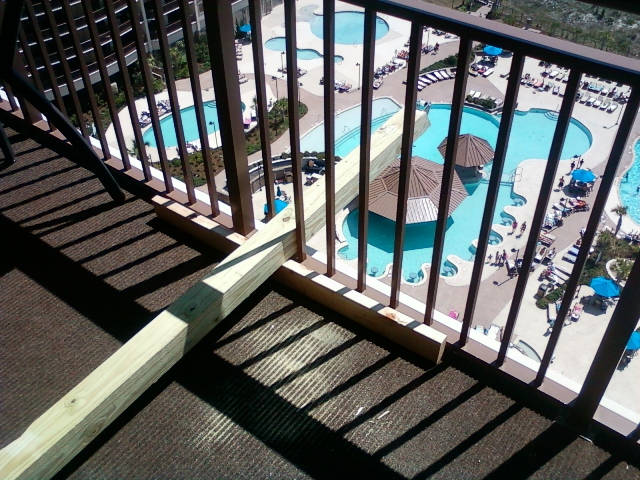 To ensure that the whole thing wouldn’t go flying off the balcony and crashing down the 16 stories to make a spectacular crash into the pool below, we screwed some plywood into the back end of the beam and then layered it up with the 300 pounds of sakrete. 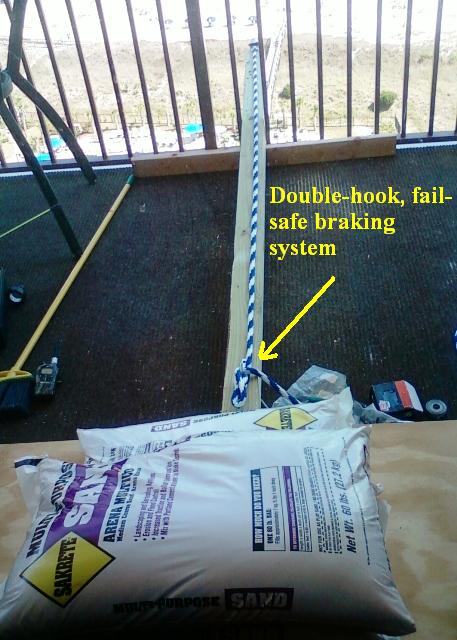 I asked my installer, "What kind of knot did you use?" because it seemed like an appropriate rope/knot type question to ask when you were about to likely risk the potential future of your company of the strength of a knot tying a hook to a rope holding a shade 175-feet up in the air. He said, "I don't know what it's called. I only know that it's gonna hold this." Good enough for me. Meaning it was time to stop thinking about it and time to start doing it. Let's lower the hook… 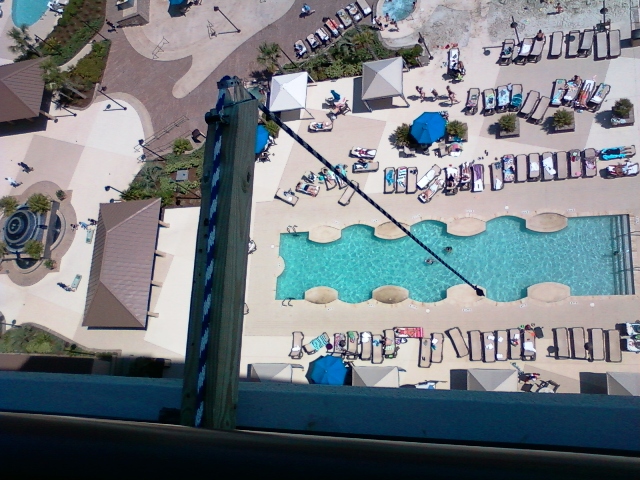 As you can imagine, when we walked onto the pool deck with this giant box and 175-feet of rope spooling down from the 16th floor, we created quite a spectacle at the swimming pool. All I could imagine is someone recording this whole thing on their iPhone and then uploading it to YouTube and sharing with the whole world this giant Lutron box plummeting 16 stories to shatter on the pool deck. So, I took up point down at the ground and kept any of the hundred or so sun bathers out of what I liked to think of as “the kill zone.” This is what The Beam looked like from my perspective: 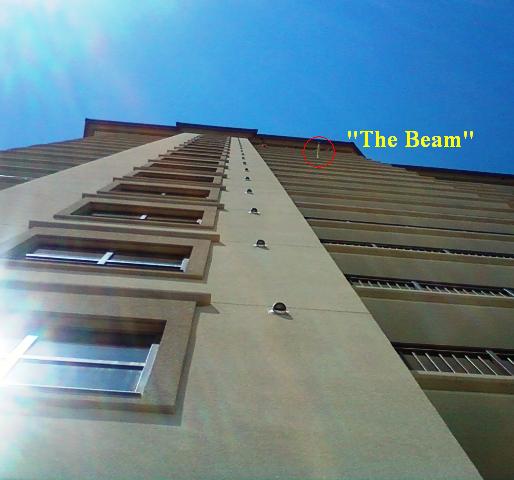 So we strap up the first box, attach it to the hook, check and recheck all the ties and bindings and my guys start hauling it up… 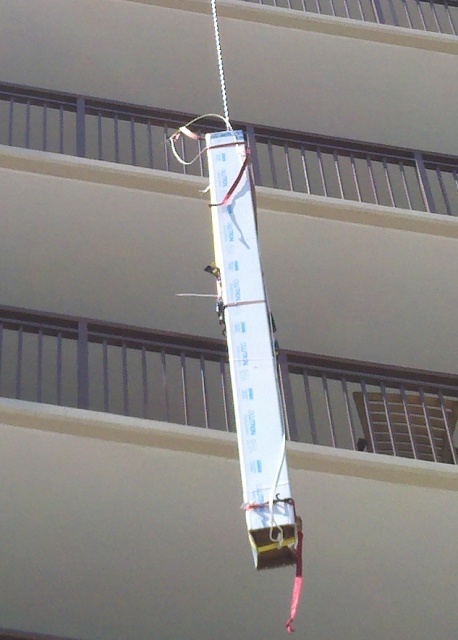 As you can imagine, there are some people sitting out on their balcony’s enjoying the ocean view, and they probably thought, “Holy… WTF?!?” when they saw this giant box slowly riding up just feet away from their faces 100-plus feet up. 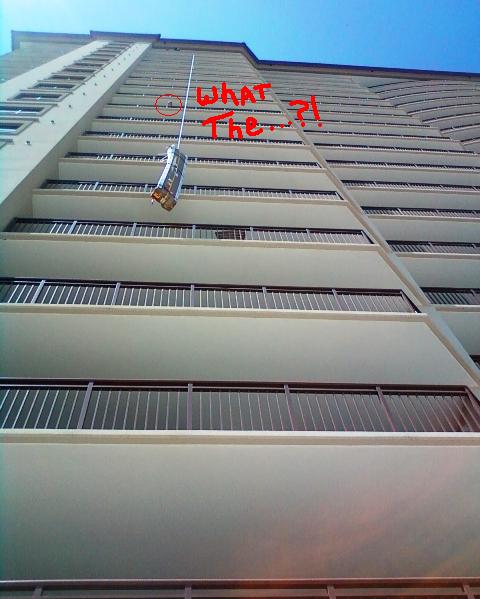 There was one really panicky moment on the first box where the wind really picked up and the box started swinging and spinning *wildly* where I felt my blood pressure spike and my pulse double and I jumped on the on the radio and yelled, “THAT BOX IS SWINGING ALL OVER THE PLACE! OH MY GOD! YOU’VE GOT TO STOP WHATEVER IT IS THAT YOU’RE DOING!"

I imagined calling my partner, Al, and leaving him a voicemail saying, "Umm, yeah. I hope you had a good day off. Well, we were raising this box up outside of this condo to the 16th floor. And, well, it fell and killed somebody. So...we're probably gonna be sued out of business and possibly be negligent for manslaughter or something. So, um, call me!" 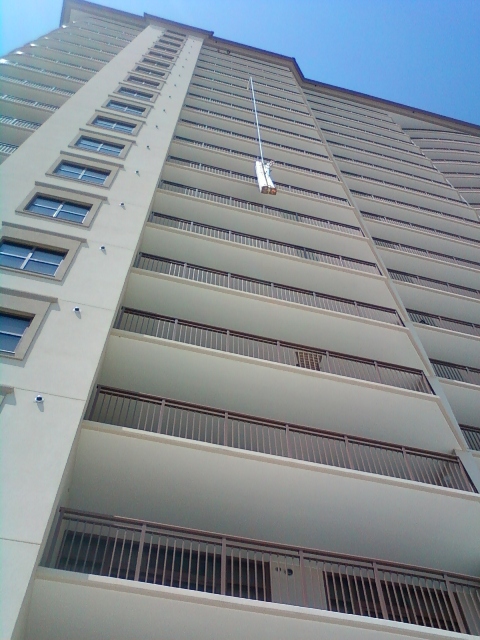 I was more worried that the cardboard would sag/crush and that our strapping would slip versus our rig malfunctioning, but, seriously, what do I know about 175-foot rope pulley systems? In the end, we got the all three boxes safely into the client’s condo, and he was once again thoroughly impressed with our company.

Tomorrow, we go back and install the thing. The only unanswered question that remains is what lies behind this door... 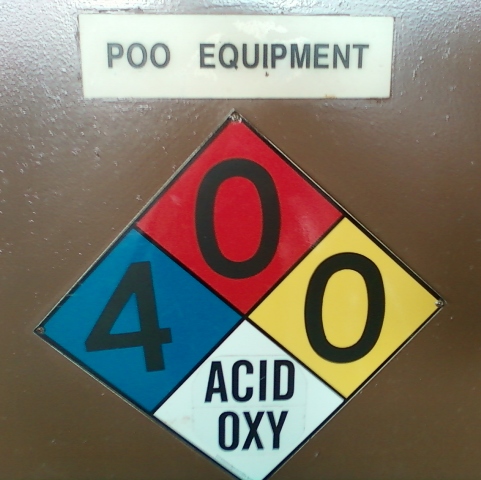