There comes a point in every person’s life when they are forced to do some real self-examining, soul searching. Where you say, “Just what sort of person am I? How would I respond to getting hit in the face with a highly polished piece of strengthened aluminum?”

As I told you before, I don’t often go into my day job thinking, “Hmm. Today is the day that I could potentially *kill* someone. Better tread extra careful.”

That’s really one of the joys of being a custom installer; that kind of laissez-faire absolution from any serious wrongdoing on a fellow man.

Likewise, I don’t often go in thinking, “Hmm. Today is the day that I could get injured at work.” I mean, sure, I’m sure I’m at risk for some carpel tunnel issues down the road, there’s the occasional computer-monitor-induced headaches and people calling saying it’s NOT their cable box – when we all know perfectly damn well that it IS their cable box – give me agita and elevated blood pressure, those are all pretty low and acceptable risks.

Today though, I got this little beauty:

(Before I continue with my tale, I want to stress that I take FULL responsibility for the injury, and that it was in no fault of the product or through any design flaw. The design flaw was entirely in my thinking. And having my face in the wrong place at the wrong time. And having a helper monkey. So, nothing but love for OmniMount here...)

So, a couple of weeks ago, I was reviewing a new TV mount from OmniMount called the PLAY40. Without giving away too much of my review, I loved it. The mount allows you to EASILY move your TV in all manner of directions. And by “all manner,” I’m including up-and-down, as the mount travels through a vertical range of 20-inches. (You will find a surprising number of uses once you have a mount that also goes up and down. It’s like adding 3D to your mount. But good 3D. With no eye-strain or possible death to seniors.)

The other big trick of the PLAY40 is that it utilizes a magic brand of secret sauce patented technology from OmniMount’s sister (or parent, I’m not totally sure the exact relationship, but there is definitely shared blood, or at least financials) company, Ergotron. (Which is not to be confused with Megatron, Voltron or even regular Tron.) This tech is called Constant Force Technology, and it allows the display to be moved through its entire range of motion with the gentlest amount of force. Gentle enough that Lauryn could move the set. (If you’ve ever tried to move a traditional arm mount, you’ll know that unless your name is Magnus you stand a pretty good chance of failing.)

My conclusion on the mount was, “Really, there’s not much you can do to improve or change a TV mount, so it isn’t often that you find a product that is truly an evolutionary design step forward. However, the PLAY40 is such a product, and it is easily the best full motion mount I have yet to, um, play with.”

Today we decided that we would relocate the TV to a different part of our store where the mount would easier to demonstrate to customers. So, I call in our new guy employee – whom I shall refer to as Jerrme (because that’s his name, and how he spells it. Funny story: at first we thought he misspelled his own name on the job app. Seriously. We almost didn’t call him back because of it.). I’m explaining to Jerrme what I want him to do, “I want you to take this mount down, and then move it over and mount it here. Here, I’ll help you take the TV off of it…”

It is probably appropriate to show you a picture of the PLAY40 at this juncture in our tale. 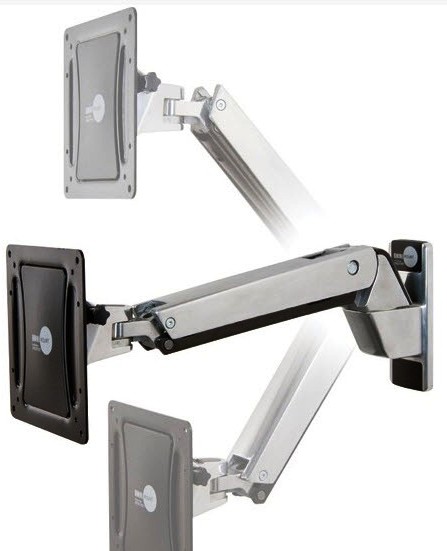 See that gleaming, military-grade, brushed aluminum, glistening-to-a-sharpened-edge right in the middle? That is what OmniMount calls the “arm” and what I know think of as  “the spring-loaded face puncher.”

Notice the three positions; bottom, middle and top. Now, what holds the set in those three positions is a spring of unholy power forged in the very bowels of Mordor. A spring so powerful that compressing it causes new elements to spring force on the Periodic Table. But the genius of the design is that when carefully managed, it allows the TV to glide and float with fluid, effortless motion like a graceful ballerina. In a way, Constant Force Technology is kind of like nuclear fission. Treat it with respect, and you’ve got immense power. Eff with it the wrong way, and you’re glowing for a million years.

So, my first mistake was in removing the TV when the mount was in the DOWN position. As a child, they never teach you “what goes down must always come back up!” but in PLAY40 land, what goes down comes up the fury of a thousand generations of scorned springs.

My second mistake was in having Jerrme HOLD the TV while I was unscrewing the back plate. Now, traditional wisdom would have you think, “When I remove these four screws, the screen is just going to go smashing to the ground. That’s probably bad. I’d better have someone hold onto it.” But in PLAY40 land, there is a locking ring that holds the TV in place to ensure that you can ONLY remove the TV while the spring-loaded face puncher – or arm, call it what you like – is in the fully upright and seated position.

So, as I am leaning OVER the arm removing the last screw and Jerrme is holding the TV, unwittingly causing it to slip out of the locking ring – one thing simultaneously happens: the arm shoots STRAIGHT up and smashes me in the face right between the eyes.

“GOD! That hurts! That REALLY hurts!” (I'd like to say that pain was a great muse and that I shouted some really clever and brilliant poetic prose, but, this is pretty much what I remember.)

I take away my hand and look at it. There is blood. So I ask the world’s most obvious question. “Dude. Am I bleeding?”

“Oh, yeah. You’ve got like a giant gash in your face. You’re lucky that didn’t hit you in the nose!”

(Refer to picture above, yet imagine streaming blood)

So I just stick a Band-Aid on prepare to call it a day. But it starts bleeding through the Band-Aid and I show the wound to Jerrme and ask him if he thinks I need to get stitches. I’m really more worried about having a gnarly face wound scar where, say, I didn’t have one before. Jerrme says he thinks I should and then I call Dana and she ABSOLUTELY thinks I should. (She didn’t leave a lot of room for doubt.) So I head up to the local doc-in-a-box.

Dana and Lauryn meet me there and – once she sees that I’m mostly OK -- Lauryn is pretty excited. She is HOPING that I’ll need to get stitches. (She had a bit of a slip-and-fall into a wall a few months ago where she went forehead first into a wall corner and needed six stitches to close it up.) She says that if I get stitches then she and I will be on “the stitches team.”

The doc finally comes in, and while I don't remember all of what he said, I remember him going on at great length about amazing strength of character and fortitude and used phrases like "courage," "hero," "would've killed lesser man," and "modern-day John Wayne." I think he might have teared up for a moment and at one point he may have asked me for an autograph. (Wait. Dana is telling me no. OK. So there might not have been an autograph.)

Three-and-a-half hours later, I come out looking like this: 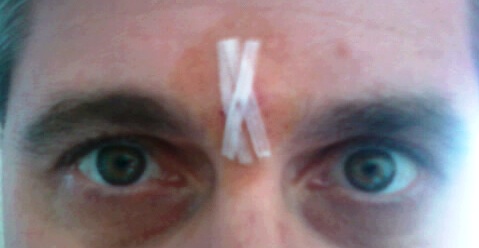 Some iodine, steri-strips, and a tetanus shot and he says I’m as good as new.

When I got back to the store, the mount was up in its new location. I walked over to it slowly, approaching it warily and with full caution. Treating it much like you would when walking past a sleeping lion or say when playing with a loaded gun or when thinking about taunting a cobra that was all hooded up and bobbing back and forth.

So I plopped back into the relative safety of my office chair and got a phone call from the CEO of Ergotron. (Omni’s PR team was quite concerned over this when I tweeted. “File under "Do NOT do this!" Removed TV from spring loaded arm mount. Snapped up and smashed into my face. On way to get stitches...” and then “No joke...that thing punched the sh-- out of my face. Remove set with care!") So after a few moments of explanation, where I told him what happened and Mr. CEO stressed repeatedly how safety is of their utmost concern, he decided that a sticker on the back of the mounting plate area by the screws might be in order.

Don’t worry, Mr. CEO. I’ve got the perfect warning all ready for you: 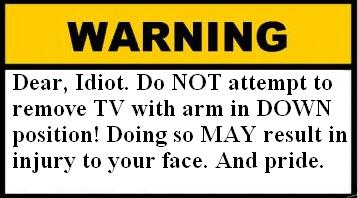 Reply DW
12:03 AM on July 28, 2012
OmniMount has a new ad slogan for the PLAY40: "The TV mount that bitch slapped John Sciacca!" And once the strips are removed, you should keep applying the iodine. It gives you that warm and fuzzy "I just got bit by a zombie" look.

When is the doctor going to post the video of you crying like a baby when he applied the steri-strips?

I must say I was disappointed to discover that you didn't get actual stitches, or at least had to wrap your head with an entire roll of gauze so you looked like you were wearing a turban. No maiming. No lawsuits. No huge payoff of hush money. What a letdown of a story...

Reply thetimchannel
4:16 PM on July 28, 2012
Another buddy of mine wrote up a similar screed about an experience he had with a GARAGE DOOR spring. I can assure you the carnage inflicted was an order of magnitude greater than what you got off the little TV mount!! He got his hands twisted up in that spring and was hanging from the ceiling like a spider monkey in a poacher's snare. Springs, they are definitely not to be messed with. And for the record, this is how you die. You do some stupid shit you never thought would be an issue and then wham, the hammer drops. Enjoy.


It sounds like you have a story to tell here... And I for one want to hear it! Please to share...you're amongst friends here...

Reply Christopher Lee
6:08 PM on January 18, 2017
I don't know if it is your fault or not, but I just bought a Play40 mount, and on the back plate there is a warning sticker with a picture of someone getting brained by the arm and the words "Stored Energy Hazard".