How many times has this happened to you…

You’re over at someone’s house, say, babysitting their kids. You start browsing through their movie collection looking for something to entertain the little youngins. As you are flipping through the titles you spot an interesting sounding film. You think to yourself, “Hmm. This is the fourth movie in the series; that must mean that the first three were also good, so chances are this must be a great film! It’s probably about tool and workshop safety and maybe has some crafting tips we can try. Maybe by the IVth film they are getting into advanced woodworking and mitering technique! Oh, this is just the film to keep the kids entertained for 90 minutes!” Confident in your selection, you pop in the disc and shout, “Hey, kids! Gather ‘round! We’re all gonna watch Saw IV!”

At this past CEDIA Expo, Kaleidescape unveiled a new addition to their awesome iPad control app to (hopefully) prevent this very thing from happening. With the integration of Rotten Tomatoes, Common Sense Media and Web search to the company’s awesome free iPad control app, system owners can now make informed decisions about the movies they watch and choose to show guests, or just have more fun browsing their own collections.

The new options appear at the bottom of any film selected in the iPad control app: 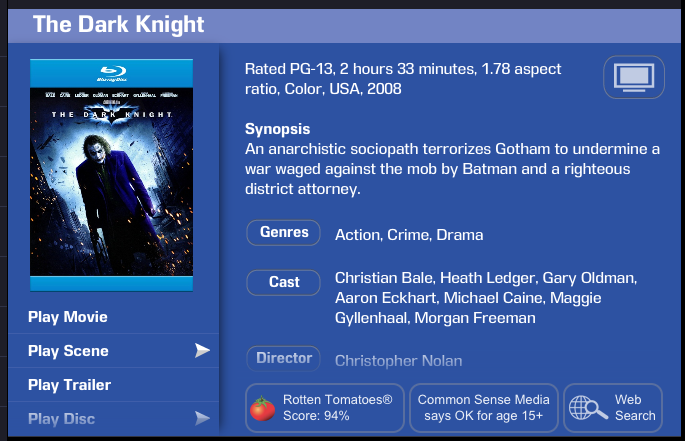 I’ve been living with a beta version of the app for about a week, and the first thing I’ve noticed is how the app encourages browsing through your films; looking to see how favorite films were reviewed and ranked by Rotten Tomatoes.

With the Rotten Tomatoes app you can see the rating that each of your film received by a panel of professional reviewers. I discovered that I have several films that have been rated 100% by Rotten Tomatoes including Toy Story 1 and 2, Jaws, Aliens, and The Terminator. I also found that a film my grandfather, Giovanni, had a part in – Twelve O’Clock High – received a 95% score. (The lowest rated film in my collection is Dumb and Dumberer: When Harry Met Lloyd at a dismal 10%. I have to agree. What can I say? It was a free giveaway at a tradeshow...)

You can also read excerpts of reviews to get a better idea of the ratings. From this I learned that Vincent Canbv of the New York Times thought one of my Top 10 films, Dead Poets Society, was rotten and that the “movie undercuts Mr. Williams’s exceptionally fine performance, making the character seem more of a dubious fool than is probably intended.” (Liar!)

Or that Roger Ebert and I are in total agreement on one of my foreign-Indy favs, Flirting which he thought was “one of those rare movies with characters I cared about intensely. I didn’t simply observe them on the screen, I got involved in their decisions and hoped they made the right ones.” 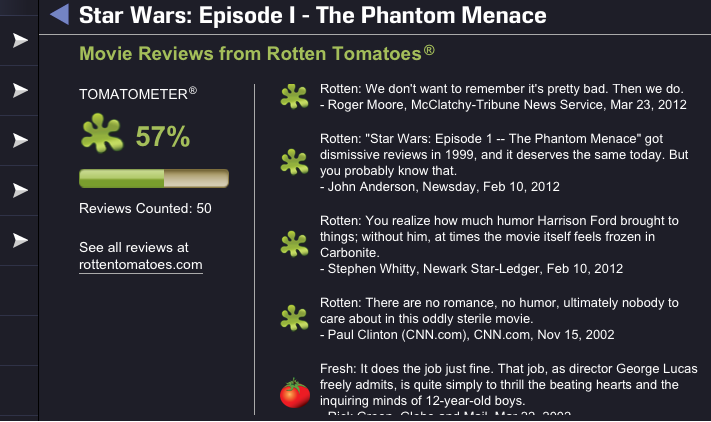 As the parent of a movie-loving 6-year-old daughter, the Common Sense Media information has been a great tool to help determine if we think a movie is right for our daughter; highlighting parts that we may have forgotten or just mentally glossed-over. (Like the use of a certain "racial slur" in The Sting...)

Common Sense Media provides an overall age rating (OK for ages XX) along with a quick synopsis of the film, “What parents need to know” and a breakdown in 8 different categories: Educational value, Positive messages, Positive role models, Violence, Sex, Language, Consumerism, and Drinking/drugs/smoking. While it’s obviously best to see the movie first and *then* decide if it is right for your family, the Common Sense ratings are certainly helpful in making a more informed decision. Like, say, is my almost-6-year-old daughter old enough to see Star Wars: Episode IV? 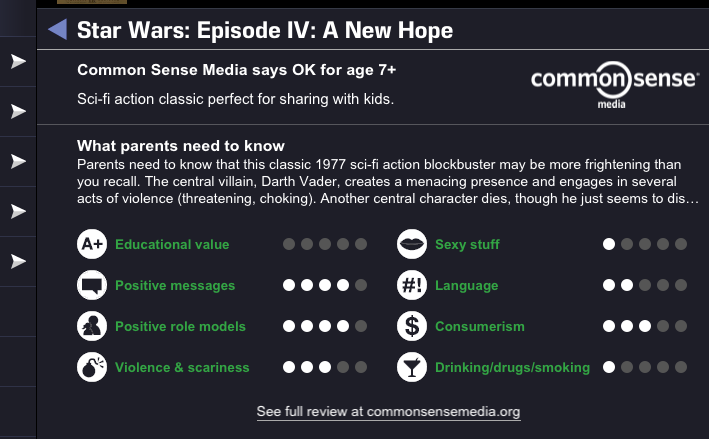 (I decided that she was. You can read her thoughts on seeing Star Wars here...) 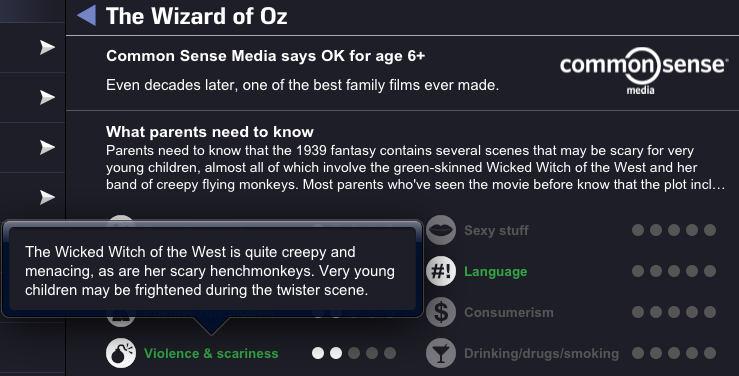 Or the messages about positive role models in Air Force One: 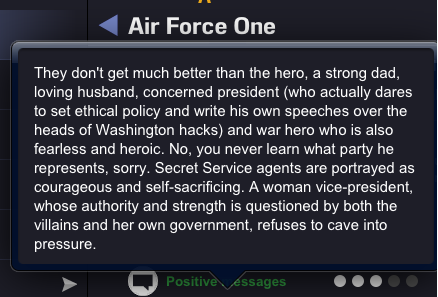 And, in case you were wondering, it most definitely does NOT recommend Saw IV for kids of any age…well, unless “gory violence, beginning with Jigsaw/John’s autopsy (sawing through skull, slicing through chest, and breaking rib cage open, all with yucky sound effect, in close-up with much blood)” sounds like the right… No. You know what? No. Just don’t show it to kids. Or anyone for that matter...

For instance, had this existed when I was growing up, I wonder if my own dad would have still taken me to the drive-in to watch Jaws when I was 5 – a film that basically scarred me for life, by the way. Thanks, dad! – if he had read that the movie was “OK for age 12+” and was a “five-star movie could scare the pants off kids”? Or read that it has “Only violence of the nature-versus-human variety, but it gets fairly gruesome, with thrashing, foaming blood, and severed body parts. This is scary stuff. That’s one big man-eating fish, who escalates suspense by remaining hidden a good portion of the time.” (Sadly, there is no Common Sense data for the other film that scarred me at a young age, Salem’s Lot...)

(True yet humorous and partially related tangent: Years ago I was at my friend Dan’s house. His sister-in-law, Lynn, and I went to the video store to pick out a movie to watch with the in-laws, a very *very* German older couple that didn’t see many movies. We browsed through the video store looking for something benign and ultimately picked Doc Hollywood. As a trailer is running before the movie begins – Don’t Tell Mom the Babysitter is Dead – the older woman loudly exclaiims, “Vat iz zis? Zis movie looks terrible! Zis must be X-rated?!” At that point, my friend Dan mentally fast-forwards through the film, performing his own version of Common Sense Media, and realizes that he will be nowhere near the room during the scene when the woman emerges from the lake totally naked. When the scene comes on, it is just me and an elderly German couple sitting there in totally, stark silence watching what feels like the longest 1 minute scene in cinematic history. Dan still laughs about it to this day. A real friend, that Dan...)

The final addition of the new app is a Web Search feature: 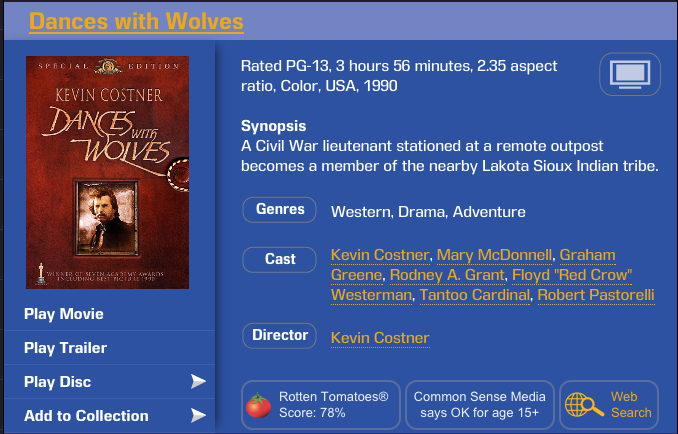 Clicking any of the orange highlighted items -- the film’s title, cast and director -- allows you to search the Web for more information with an easy way to jump straight back into the app. This is perfect for those times when you’re wondering, “God! I know I’ve seen her before! What else was he/she in?!” Now with a quick click, you can call up all of that information.

There are a couple of features I’d love to see included with the integration of these services. For one, I’d love to be able to sort my collection by Rotten Tomatoes reviews, instantly seeing the highest-to-lowest ranked titles. Or to be able to sort by Common Sense age ratings to quickly narrow down to age appropriate content or to maybe sort by movies that have no sex or swearing for those times that parental guests come visiting. Kaleidescape assures me they are working to add these features, but didn’t want to delay the release of the app.

For Kaleidescape owners, the app is free in the iTunes store, and the update including these exciting new features will be available soon!

Reply Dan
3:27 PM on November 12, 2012
My only regret was not grabbing the remote and working it from the next room, having the girl come out of the lake over and over and over again until somebody has to say, STOP!!!!!"
Btw. Lynn was in the room; but like all movies she had fallen asleep a long time ago.

Reply Bill
12:49 AM on November 13, 2012
?gory violence, beginning with Jigsaw/John?s autopsy (sawing through skull, slicing through chest, and breaking rib cage open, all with yucky sound effect, in close-up with much blood)?

... how else are the little ones supposed to learn about human anatomy? In school?