iPlay wIth iPad2 iS iMminent!

Yes, yes, I know that I haven’t spoken about iPad for awhile but that definitely doesn’t mean that I have forgotten about this little bit of techno-magic, carried down from Mount Tecca and bestowed upon us by his Jobs-ness. Oh, no. Oh, Good Gawd no!  It’s just that, well, like some kind of intense burning tropical fever that bakes away millions of brain cells and then burns itself out on its own unsustainable intensity, once the initial delirium wave of “I HAVE TO HAVE AN iPAD!!!” has passed, I discovered that I actually *could* live without owning an iPad. Then, after a few months, when I started to question whether or not the iPad-less life I had could actually be technically referred to as “living,” we bought one for Custom Theater and Audio. This was purchased under the guise of needing to have one to demonstrate our store’s Control4 automation system, but truthfully, it was the technology equivalent to dialysis; a substitute that would clean the dirty, iPad-less build up in my life and that would have to suffice until I got my own new kidney, err, iPad.

And now that I’ve had the opportunity to play with an iPad on a near daily basis – and bring it home on many – MANY – nights to play with – it is sitting next to me on the couch right now as I write this. Hi, iPad. Love you! Kisses! – at home has taught me a couple of things about this game changing device...

Thing 1: The iPad is crazy cool. What it does – which seems to be just about everything – it does very well. Surfing the Web, reading e-mail, watching/listening to iTunes content, doing the YouTubes, etc. It’s just brilliant for all of this.

Thing 2: The iPad is such a part of my automation control lifestyle now that it just plain sucks to go back to controlling my system without it. I mean, I love you, URC MX-980, with love, L-O-V-E, love, but the iPad offers a level of feedback that you just can’t touch. (I got some ideas for you though. Call me! We’ll talk!) From my Lutron lights, to my Kaleidescape, to my Marantz pre-pro, to the Sooloos system I’m reviewing, to the Remote/AirPlay app that beams music from my iTunes library to my Marantz...there are dedicated apps available for all of them. And not having to turn the TV on to select a Rhapsody channel, or to just lean over and swipe a couple of buttons to adjust the lights, it’s SO cool. And that’s today. Tomorrow – or the technology equivalent of tomorrow which is next gen – every product that comes out will probably have a dedicated control app. Probably available for free. Stuff like Disney’s Second Screen App where you get bonus material in real time on your iPad? Killer. Traditional devices can’t even have Inception-style dreams about doing this kinds of stuff. But for the iPad it is just a gen 2, still in development, “Hey, guess what else this crazy thing can do?!” feature.

Thing 3: It is SO speedy. While it might not be technically “always on,” it responds like it is and is almost always instantly at your beckon call. It’s like Firefox, but you don’t have to think in Russian. Or Chinese. Since it’s Apple, you barely have to think at all. Want to check a quick e-mail? Push, swipe, read; you’re done in like 30 seconds. With my laptop, going from off to reading an e-mail would probably take like 4 minutes. (And that's probably being kind.) All the while I’m staring at that stupid spinning Vista circle thingy, thinking about lost productivity and watching genius blog thoughts disappear into thin air and wondering just what benefits 3 Gigs of RAM are getting me. And then trying to decide if I even want to bother checking to see what the latest batch of spam has to say.

Thing 4:  Even outside of the app store, you are constantly finding new uses for it. For instance, where you might see something on a movie or the news or whatever and before just sat on the coach in your near vegetative, comatose, TV mentally-thickened state slowly forming the thought, “Hmm, what kind of cheese was in that Amazing Race fondue? Oh well…Brain! Stop thinking! TV talking!” In an iPad world, you would just flip-swipe and see that it was probably Gruyère and Emmental. Or you might wonder, “Is Absinthe, the Green Devil, that Darryl Wilkinson keeps bragging about drinking even legal? On the one hand, it’s Darryl. Darryl Wilkinson. The green-eyed devil of the A/V journalism world. And on the other hand...oh well. Go back to numbing brain with non-Absinthe inspired drink.”  Instead of *ever* trusting anything Darryl says -- especially if it is about your sexual orientation, which I’ve only found to be hurtful and full of twisted half-truths – you could quickly iPad to find out that Absinthe is kind of legal; banned in 1912, it was made legal again in 2007 with substitutes for the potentially ear-cutting-off, degenerate-inducing Thujone. So, while there’s still no clear explanation for Darryl’s degeneracy, you can toast it with Absinthe! Or you might be watching a movie and you might first think and then blurt out, “Wow that girl’s pretty, uh, I mean, she’s a really, um, great actress! Yes! It’s her acting that I love! I wonder what every other movie she’s ever been in?” So now you can IMDB things while watching movies and TV shows and then immediately add them to your Netflix queue right while you’re thinking about it instead of hoping that I will remember and then forgetting to do later and then ending up with some giant losing streak in my queue.

Thing 5: The iPad really is amazing at all of these things. But where it is less than amazing – and by “less than amazing” I mean where it totally licks balls – sweaty and salty bitter, working all day long in a hot, dusty field, wearing really tight, with absolutely zero breathability pants, standing, squatting, working and sweating in the noonday sun balls – is on typing. The keyboard is spaced out well enough and it is pretty sensitive, and is fine for keying in URLs or maybe a Google search or two, but typing anything more intense than, “Got message! Doing fine! Talk later! Luv!” is brutal. (PS: That was a message I typed while being held hostage by the Taliban and I stumbled across an iPad and had a full hour totally unobserved. It was the best I could manage in that time.) Now I’ve heard rumors that some people exist that can actually type lightning fast. But I’ve also heard that some people have seen Yetis, the Loch Ness Monster, UFOs, and the Air Force Project Aurora, and I don’t necessarily believe that either. And sure, there are probably 12-14 year old Asian girls that can swipe out or thumb board messages with the speed of Don Draper’s secretary – you know, the old one that died, not the young ones that are just there to make the office look good – but for me it is a slow, borderline painful, exaggerated finger poke letter...by...excruciating...letter process. And often the Pad tries to unspell what I have spelt. Hey, my name is Sciacca. It’s not gonna be in a dictionary. I get it. Doesn’t mean you have to try and respell it. And more than 50% of the time it turns “jmdls” my e-mail handle into “undos.” Then, I have to UNDO “undos” and redo “jmdls” which takes like 50,000 extra keystrokes and inflames my carpal tunnel.

Thing 6: From the second El Jobs announced iPad1, I knew there would be a second gen Pad. Steve probably had it under his turtleneck right from the beginning in case the faithful didn’t embrace iPad1 with the full zealous embrace that he was expecting. Without a doubt, iPad2 would improve on the first. Unlike New Coke and Breaking 2: Electric Boogaloo, iPad2 was going to take the best of the original and supersize it. Cameras, thinner, faster, improved screen, enhanced killing power. If there were bionics, it would have them. It was going to go all Empire and Wrath of Khan up on this mutha! So, as much as it pained me to hold off, I knew something better was coming. 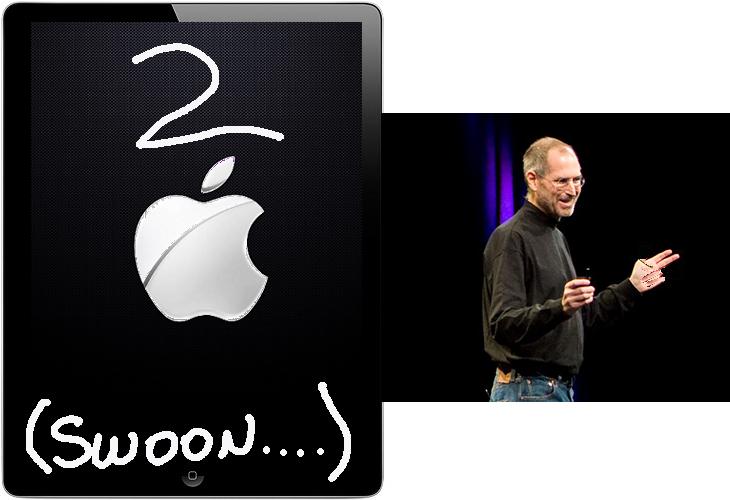 And then iPad2 came out and apparently I waited like 4 hours too long because then it became virtually impossible to find. (Look, I’m just not down with pre-order. I’m raised to believe that technology is available and that if I have the money, I should be able to Johnny-skip on down to the store and pick one up. And unless “iPad2” is code for “Golden Ticket to Wonka-ville” or “Present in lieu of cash at any establishment,” I’m not going to get up and camp out to get one. That is a journey into the land of nerd-geekdom that I’m just not ready to take. Yet...)

Well, my brother, Adam, totally shocked me the other day. Living out in the Bay Area and basking in all of his MBAs and B-of-A corporate VP-ness, it appears that all of his fancy extra-educations have finally paid off – well, finally for me at least; having heard about his bonuses and 1040s, I think it’s been paying off for him for some time now – and he said that he wanted to – wait for it…waaaay-ate! – BUY ME AN iPad2! I know, right?! How many iPad2s has your brother offered to buy you? I’m betting that I’m in the definite minority of sibling iPad purchase offers. Adam said he was going to Portland for work – the land of Clyde Commons and Powell’s Books and no-pumping-your-own-gas – and also of no sales tax. Thus making the iPad2 10% cheaper than him normally buying it in the Bay Area, so he wanted to get me one.

Of course, I protested. Rather vigorously at first. “Oh, Adam! That’s so nice, but no! Really. I just don’t want you to buy me an iPad2.” Then some time would go buy and it still wouldn’t be at our Best But and again he’d offer and I’d protest somewhat still kinda strenuously, “No, no. I want to buy my own iPad2! You know? I mean, I should, right?” I offered what kind of technology writer would I be if I didn’t even buy my own gear? And suggested that it violated some kind of big brother code of ethics to let him buy me an iPad2. Then we he was getting ready to leave for Portland and I was still iPad-less, and, he finally broke me. All those bright lights, and blaring rock music and sleep deprivation finally did it. I acquiesced. I was like the guy at the table who had enjoyed a wonderful meal – with pre-dinner premium single malt scotches and apps and desserts and post dinner port with cappuccino – and then *kind of* reaches for the bill when it comes. “Oh, really? Wow! You wanna pay? Are you sure? I mean – hand moving steadily away from the check – I totally wanted to buy this. But, well...OK. Thanks!”

So, Adam went to Portland with the goal of getting me an iPad2. Then, he got Pad-blocked. No luck. So he had AmEx Platinum Concierge call ALL of the stores in town…and still no luck. No Wal-Marts, no Best Buys, no Targets, no Apple stores, no whoever else doesn’t sell iPad2s. There were no Pads to be had. So, he did the next best thing. He ordered one for us both from the Apple store. And today I got this: 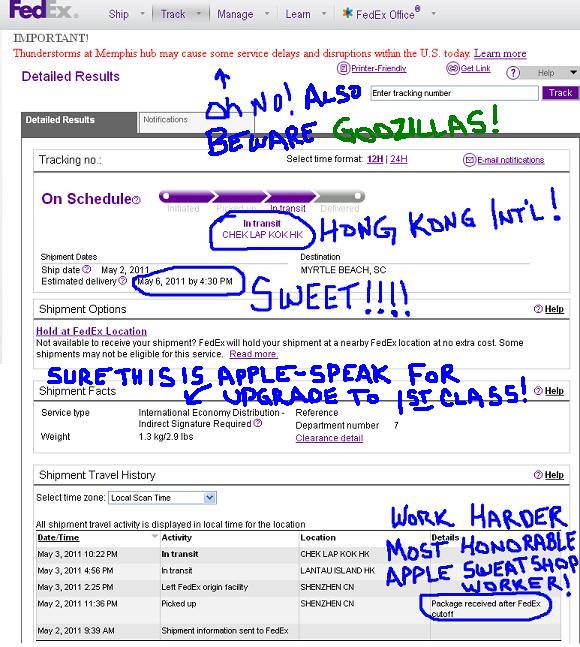 I’m declaring this coming May 6 the official iPad2 day! Celebrate with me won’t you? My first Facetime chat is already reserved. It’s the smallest thing you can do for a brother.