Make sure the team is geared up for sales

“A-B-C. A – Always. B – Be. C – Closing. Always be closing. ALWAYS…BE…CLOSING! A-I-D-A. Attention, Interest, Decision, Action. Attention - Do I have you attention? Interest - Are you interested? I know you are, because it's f--- or walk! You close or you hit the bricks. Decision - Have you made your decision for Christ? And Action. A-I-D-A, get out there!” – Best…speech…ever! Glengarry Glen Ross

Few of us will ever pull off the full-on, balls-out, “Third place is…you’re fired!” sales Jedi mindtrick mastery of Alec Baldwin’s “Blake” from Glengarry. The kind of I’m everything and you’re nothing, slick-haired attitude that demands you walk up to a lesser man, shove a chunky gold Rolex under his nose and sneer, “That watch costs more than you car. I made $970,000 last year. How much you make? You see pal, that's who I am, and you're nothing” just because you can.

And, truthfully, while Blake might be a fun character to watch – and he is; oh, he *really* is – Blake would likely be a total dick to hang out with in real life and probably wouldn’t have a lot of friends or any female companionship that he wasn’t paying for. Top dollar, of course, but paying nonetheless.

But, like the good little “always be prepared” sales Boy Scout that Blake is, there are definitely things that we can all learn and DO to improve our chances of a successful sales interaction. And I’m not talking about closing those mega jobs; the jobs where you compile a telephone-book sized document filled with CAD drawings and stuffed with D-Tools wiring schematics and a well-prepared virtual, 3D animatic fly-through of the imagined space. (Theo Kalomirakis showed me one he prepared for a client once. It was so impressive I was like, “Damn! Who do I make the check out to?!” Then he told me how much and I was like, “DAMN!!!")

I’m talking about the little things. The simple things. The money just lying there, waiting for you to come along and ask to pick it up things. Those little bits of extra cash that we can so often leave on the table because we either weren’t prepared or hadn’t stocked up or fleet vehicles appropriately or didn’t ask.

What I want to talk about  here are those impromptu, spur-of-the-moments, impulse, “Aha!” sales moments that are presented to us almost every day that we have to be ready to capitalize on. That you have to train your staff to look out for and jump on. And in a market climate where the profit on a flat panel TV sale is often in the double-digits, wouldn’t you like to make an extra $100, 200, 500 bucks on each service call? 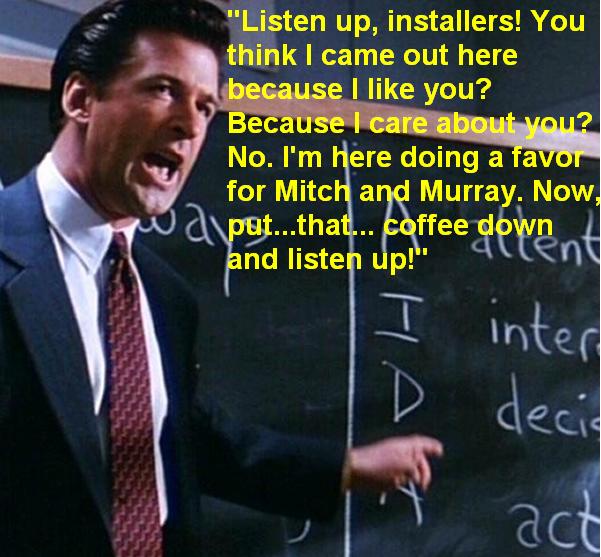 These are some items that we have started keeping stocked on our trucks during service calls, making sure that our technicians are always ready and prepared to capitalize on any sales opportunities that might present themselves.

The flat panel mount is pretty much the ultimate modern-day attachment sale. And if you haven’t had several instances where you made more on the mount than you did the TV, then I question if you are actually doing any install work in this day and age. I can’t tell you how many times we’ve gone to a job to do something simple and having a flat panel mount on hand turned into an extra bit of work. Sometimes the customer changes their mind, sometimes my installers will suggest it, and other times they’ll just remember they always hated having that TV sitting on the top of the chest of drawers. Whatever, have mount, will install.

When they are in the store, people – OK, men – are often all full of bravado and machismo. “I don’t need a smart remote control!” “You want HOW MUCH for a remote? Forget it! I can use it just fine with the remotes it came with!” “Never needed one before. Don’t see why I need one now!” OK, tough guy, we’ll see about that. But once you get the gear all unpacked and hooked up, and they see the 4-5 remotes all lined up and you start in with the “OK, now, to watch TV you press this button on this remote, wait a few seconds, then press this button like 3 times to cycle to the right input, now grab this remote and press this button, and then get THIS remote to change channels. And then back to this one for the volume” and they feel that watery panic of maybe, *just maybe* not being able to figure out their new system to watch Glee that night, well then, all of a sudden that remote doesn’t seem so pricey, does it? In fact, it suddenly became a bargain. Seriously, those things DO sell themselves.

Look, I prefer RF systems. And chances are YOU prefer RF systems as well. They are more reliable, they don’t require the pointy-pointy, they aren’t nearly as prone to interference, etc. But when the option is either a full blown remote system change out that might cost $650 or more PLUS programming, OR a quick and easy $225 IR repeater system install you are probably going to close more IR systems. And I don’t know what it is about an IR repeater system, but people are often more blown away by them than they are by the other insanely cool stuff we do. “Honey! Oh, honey! You have GOT to come in here and see this! I can change channels…with…the cabinet…doors…CLOSED! It’s amazing! I’ve got to get on the FaceBook and tell everyone!” They take up hardly any space, and they perpetuate your legend as an A/V magician.

If you think people get a serious case agita when their TV goes down, just see how big a case of the chapped ass they get when they can’t get on the Internets. It can get downright hostile! And even though we all know they just want to check their e-mail and look at their fantasy football league and track that E-Bay auction, they will quickly start yammering about how they are “missing work!” and “have important work!” and totally non-Google related things to do. Have a router on the truck, little Boy Scout, and you will be the can-do hero that is ready to restore their Internet peace.

The Networks and the Wi-Fis:

In line with the Internets, you also need to be ready to sell anything network or Wi-Fi related. Having a switch and wireless access point on the truck is a no-brainer. In fact, you could probably walk into 90% of homes right now and say, “Do you have any Wi-Fi dead spots where you’d like to use your laptop or iPad? I’ve got a WAP that will cover those areas for ya” and probably just travel the country like Johnny WAP-pleseed (I just made that up. Awesome, right?!) installing Wi-Fi and seeing the land. And with all the network capable gear out there, chances are you’ll find something – or be installing something – that will end up being one Ethernet connection short. Hello, Mr. Switch! Another easy seller network style? Ethernet-over-power kit. These bad gals send the sweet Ethernets over a home’s existing powerlines. They install in like 5 minutes and make you look like a total MacGyver. “Oh, you wanted a wired jack there, but the other guy forgot to pull a wire? Know who can make that work for you? This guy. That’s who.”

This SHOULD go without saying but I’m gonna say it anyhow: Keep those vans stocked with a decent array of cabling. Maybe you’ll get that “surprise” TV mount sale. You got a long enough HDMI to run through the wall? And you know the other sneaky little bugger that always seems to turn up short when you need him most? The mini-jack-to-stereo connection. It’s the quick and dirty way to connect an i-Something to a stereo for a bit of a listen, but sometimes it’s just the perfect thing. Make a lot of money from it? No. Make the customer happy by solving their “I’ve just GOT to be able to listen to my new Lady Gaga Pandora channel for my Little Monsters party!” crisis? Yes. Well, probably.

A Blu-ray player is not JUST a Blu-ray player any more. In fact, playing spinning discs – Blu or otherwise – is almost becoming the add-on attraction. People want it for all of the streaming services. (You DID bring the networking stuff, right?) So when you see that they have an old, Funtai DVD player that looks like it should never have been manufactured to begin with, why not suggest they let you upgrade them to a new Blu-ray player? Sure you’ll want to pontificate about the way better picture and sound quality, and how Blu-ray is going to replace DVD and how there are so many new cool special features and the sweet pop-up menus, but what they’ll hear you say is, “Wa-wa-wa, wa-wa, wa-Netflix and Pandora.” And then they’ll want it.

Now, could you just reschedule and come back to follow-up on any of these lost opportunities? Sure. But that is another truck roll to pay for, another item that needs to be worked into the schedule and an opportunity for the client to just say, “You know, I changed my mind. Let’s just forget about that.” The iron isn’t always as hot as it used to be. Be ready to strike it when it is! Then strike the crap out of it! Remember, "They're sitting out there waiting to give you their money. Are you gonna take it? Are you man enough to take it?" Coffee is for closers, people.