My brother, Adam, generously gifted me an iPad2 several months ago. I had been wanting -- and wanting -- an iPad for a while, but when the launch of the 2 was imminent, I decided to hold off. Then when it came out, our local Best Buy didn't have them in stock, and blah, blah he finally got one for me, himself, and my parents and his wife's parents. Based on usage by not only me but Dana and Lauryn, it is seriously one of the best presents I've ever received. (Also awesome, the complete stainless steel kitchen appliance makeover my parents hooked us up with and the 5-year wedding anniversary Submariner from Dana.)

First, FaceTime -- Apple's video chat service -- is awesome. My parents like to see Lauryn at least once a week on the computer. Before the iPad, this would be an agonizing, teeth pulling process where we would break out the laptop, wait for it to boot up, open up Windows Live Messenger, and then call. It usually worked, but a lot of times it didn't. Video would freeze. Audio would drop. The calls often became more time of tech support than chatting. My mom could never really figure out how to initiate it and it almost always turned into a phone call session of, "I'm going to call you; I'm calling you; is it ringing? Are you answering? Can you see us? Your screen is frozen!" And Lauryn, who already has a very low patience threshold for such nonsense, saw any technical problems as her immediate window out  with a quick, "Well, OK, bye!" Also, even with a laptop, you were basically tethered to one spot and walking around or showing things was so cumbersome it was essentially impossible. With the iPad FaceTime video chat is almost instant. Click on a contact, it starts ringing on their end, they answer, and you're video chatting. I would say "It's so easy, even my mom can do it!" (which is true) but since none of you know my mom, you wouldn't understand the shear enormity of such a statement. (My parents took not one, nor two but THREE separate Apple classes on learning how to use their iPad. Three. OK?) And it is so small and nimble that you can easily walk around with it. "Look, here is how the change we made to this room!" "Look, here is Lauryn in the pool!" If you like to video chat, an iPad is almost worth buying for that alone.

Second is the rapid-rapid turn on times and Web access. I can't tell you how many times now we will turn to the iPad to quickly answer some question the pops up. "Who is that actress? What else have they been in?" "When your air conditioner freezes up, do you just turn it off for a while?" (Answer: Yes.) "Is a scorpion an insect?" (Answer: No. It is an arachnid.) With the iPad, Google and Internet access you are like an instant authority on anything. It's like living with your own personal Watson without the smug "I beat the humans on Jeapardy!" thing looming over you. No question needs to  go unanswered. And while none of the things we seem to Google are ever that important, it is those mundane tidbit factoids of information that make life interesting. And now we have instant access to them on the iPad.

Third is the App Store. Ultimately, as cool as the iPad is, it is all of the apps that drive, make it run, make it constantly new and exciting and that make it such a killer must-have bit of tech. And, honestly, this is why -- in my opinion -- none of the other tablets will ever really be able to touch Apple's dominance. Sure, they may have better specs, and higher this and faster that and bigger the other, but ultimately, you are buying the app store because it is what fuels the iPad to do so many cool things. And while the others will undoubtedly continue to develop their apps, Apple will always be like 100,000 or so ahead. Every night I bring the iPad to our dinner table. I use the Lutron Home+ app to set the dinner lights. I use the Marantz WizzApp to turn my processor on and set the volume. And I use the Mirage Media Server app (from the Autonomic Controls server I'm currently testing) to select a Pandora channel for dinner.

The camera is awful. Like *really* awful. Like I would rather use the camera in Lady Phone than the one in the iPad. The photos are really grainy and low-res. The iris is slow and it ends up taking a lot of dark pictures. The video recording portion does a pretty good job, but, oddly, a video I shot on the iPad and e-mailed to my mom could not be viewed on their iPad. (Then again, this is my mom, so maybe that was something covered in the fourth "How to use your iPad" class. She could watch it on her PC though, so go figure.) It would be nice if the next iPad had a *real* camera in it; like an 8-meg'er or something. Maybe with some digital zoom or something. And a flash. I'm sure Jobs lined all this up before leaving.

Typing on the touchscreen. I had originally figured that the virtual keyboard on the touch screen would be the killer typing solution. "I can use the tiny QWERTY keyboard on my phone surely this will be WAY easier to use. I'll never need my computer again! I can use the iPad for everything! Yay!" But, no. Typing on the touchscreen is just one notch above painful and one below actual torture. It is an agonizingly slow process that is filled with misspelled and mis-spaced words. (For some reason, I "miss" hitting the space bar -- the frickin' biggest key on the whole screen! -- more than any other. I know I'm pressing it, but it doesn't take. This produces double words, that must then BOTH be deleted and retyped. Also, the iPad's auto-correct is ruthless and dictatorial in its domination. I would LOVE to be able to add words to the dictionary, but I don't know how. It ALWAYS changes my e-mail from "jmdls" to "undos." Always.) Now I'm sure that there are people out there that can type on the iPad like the dickens; double index-fingering away like some kind of two-fingered savant. Or maybe even full on touch typing. I'm also sure that there are people out there that say they've been abducted and rectally probed by aliens, but I don't necessarily believe them either. (It doesn't matter how often you tell the story, Darryl, I don't believe that it was extraterrestrials that probed you. And, no, respectfully -- yet again! -- I don't want to be probed either.) For me, typing anything longer than a 140 character tweet is pushing it. If you get an e-mail from me that has originated on the iPad, it will generally be monosyllabic in nature and terse and to the point. Come to think of it, maybe that is exactly what my writing needs... 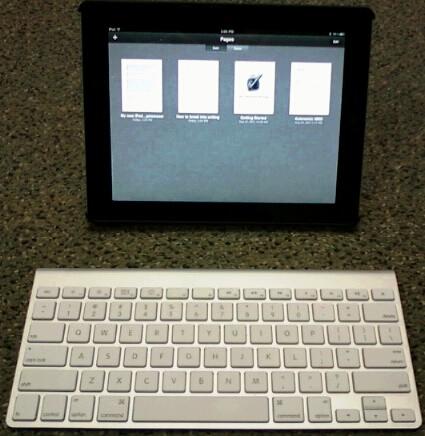 So, the other day I was in Best Buy to look at laptops trying to solve the conundrum of whether to take the advice from seemingly EVERYONE and get a Mac or go with what I know and kinda want and get the Sony. Anyhow, while I'm there agonizing over the decision, I once again saw the Apple Bluetooth wireless keyboard. I had written this off months ago thinking, "I don't want to tote that AND the iPad," but now that I've spent some time trying to actually TYPE on the iPad, and have discovered the true ass-nature of this task, I have changed my tune. I have seen the light. I have come to realize that this might be a pretty killer solution.  I picked it up; oh so very light and very thin. It is about the same size as the keyboard on my current laptop; a tad on the small side, but certainly manageable for my mid-sized paws. So I wondered, "Could this keyboard provide the perfect iPad solution for me?" I talked to the Apple guy there and asked if there were any good Word Processing apps for the iPad. Without hesitation he said, "Pages. It's the best."

So, I made the decision; I dropped $71 on the keyboard and $9.99 on Pages. I got home and installed the app and paired the keyboard and started typing away. And, I've got to tell you, this actually seems like it might be an incredibly serviceable solution. I've typed this entire post on my new fantabulous contraption. It turns out that Pages can import and open MS Word docs that I e-mail to myself. Then it can email docs created in Pages in MS Word format that I can work on later on a PC. It is the full-on Yin/Yang of Gates and Jobs co-existing, co-creating, cohabiting in Tecca! It is still a bit awkward and unnatural to reach up and touch the screen when you want to select something -- I keep reaching my right hand over to where a mouse should be; Pavlov would be so proud! -- especially when the keyboard is in your lap. And I've still not figured out how I would copy/paste links and such for the bloggie as I do on my laptop. Also, the Webs.com blog editor has this weird habit of not showing the entire page nor letting me scroll throughout the page which means that I cannot actually POST any bloggies from the iPad.

Still, for actual typing/writing, this could be the real-deal Hollyfield.  With the iPad's crazy long battery life and ultra-portability, I'm thinking this might be my new airplane typing rig. Productivity minimized! And another big win and raison d'etre for the iPad.

Reply Bradford Benn
6:50 PM on August 29, 2011
Seems like you and I came up with similar solutions. I was working on same post, now I hav eto change it up a little. Looking forward to trading notes at CEDIA. ps got some single malt......