Typically I would say that if you’ve purchased an iOS device – Pod, Phone, or Pad – the first thing you should do to improve your music listening experience should be this: Take the free, white, pack-in headphones and carefully unwrap them from their packaging. Admire them for a moment – so white and gleaming! – and say a quick word of thanks to Jobs and gang for including a complete, ready-to-listen, user experience right out of the box. And then…pitch them into the garbage. (Or, if you want a junker pair for those times when you are forced to work alongside Mike Rowe doing some unthinkable Dirty Job, or for your five-year-old that has a naughty habit of chewing on the cables while listening, toss them into that way-back part of your drawer that you only go to when trying to remember where you jotted down some obscure website user name and password.)

Notice that I hedged the opening with the word “typically.” That’s because I recently discovered a pretty incredible and exciting new technology that has definitely caused me to change my mind about this. But, I’ll tell you about that in just a bit…

The fact is, the included earphones are uncharacteristic of every other Apple product in that they’re not only NOT world leading, they offer performance that is merely meager. And while the company’s new EarPods – included with iPhone5 and new Nano and Touch – are certainly better, they are still far from ideal when it comes to music delivery. (To be fair, they *are* included for “free,” so they are definitely worth *every* penny that you pay for them.)

And despite the fact that Apple supposedly developed the EarPods for over three years and claims the “audio quality is so superior, they rival high-end headphones that cost hundreds of dollars more,” the truth lies somewhere a good ways outside the reality distortion field.

Technology journalist and internationally best-selling author, Geoffrey Morrison, sums up the state of Apple’s headphone offerings rather differently with this quote. “The old Apple earbuds are some of the worst headphones ever made. The new ‘EarPods’ are slightly less shi—y.” (The WireCutter agrees, suggesting that the EarPods have a sonic quality on par or slightly below that of other phones costing…$9.)

So, regardless of the model of replacement phones that you choose – I personally favor a pair of Etymotics and Future Sonics – the best thing that you can do to improve your music listening is to invest in a quality set of phones.

But at Apple’s recent press event the company revealed it had shipped 600 million sets of its headphones to date. And I’ve taken enough plane trips and seen enough people still wearing/using those things to realize one thing: some of you people just aren’t going to stop using the free white phones.

Fine. If you’re going to use them – and at this point, I would reiterate that you start back at the top and read down to the part that begins, “So, regardless of the model of replacement phones…” – then what if I told you there was a way to make the Apple phones – both original and new EarPods – sound better? And not just a little better, but demonstrably, massively, night-and-day, oh-my-God-I-can’t-believe-it! better?

And then what if I said it was free?

I received an e-mail promising that very thing the other day – specifically that they “optimized the acoustic properties and overall performance of the standard iPhone and iPod touch Earphones and EarPods [to] overcome the acoustic limitations inherent to the earphones supplied by Apple with these devices” – from a company I’d never heard of called Dirac. They claim to specialize in “digital sound optimization, room correction and sound field synthesis.”

Now, I’m a believer in room correction and have long used the wares of Audyssey, including their professional calibration system, to make my system sound better. You see, a room is not perfect, thus even a perfect speaker in an imperfect room will sound less-than-perfect. The results after running room correction software are tighter, deeper bass and clearer, more focused audio.

But, of course, there is no perfect speaker to begin with. According to Dirac’s Website, “There are physical constraints present in all mechanical systems. Loudspeakers and earphones are by nature mechanical and it is therefore impossible to make a perfect loudspeaker - there will always be coloration on the sound, regardless of the price and quality. Dirac HD Sound is advanced patented software technology that analyzes and corrects for these colorations. The result is a genuine improvement of the loudspeaker/earphone characteristics and thereby the sound. Dirac HD Sound is not a psychoacoustic sound effect, it is a sound correction technology tailored to a specific loudspeaker model.”

Another believer in correction is audio A/V journalist extraordinaire and international man of mystery, Brent Butterworth. Brent felt that DEQX’s correction technology at the recent Rocky Mountain Audiofest produced the most amazing demo at the show. According to his report, the technology allowed a pair of TOA paging speakers “being notorious for bad sound…with no bass, harsh treble and blaring mids” to “suddenly sound like a decent pair of home speakers.”

So, correction – correctly applied – can yield tremendous results. And it certainly seems like Dirac understands how to correctly apply their correction techniques as they count BMW, Rolls-Royce, Bentley, Naim Audio, and Theta Digital amongst clients using its technology.

Here's what the Dirac HD Player app screens look like: 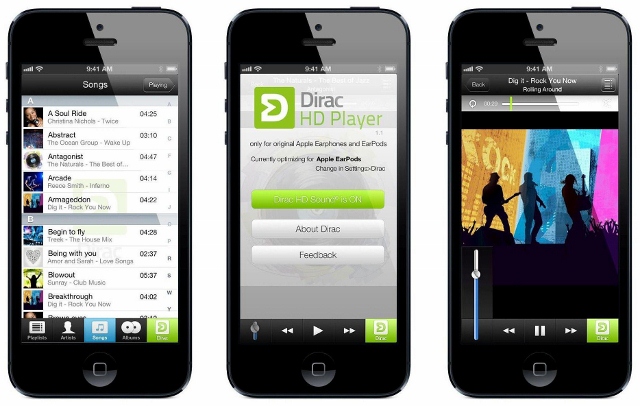 According to the company, this is how the Dirac HD Player app works its magic:

That’s big talk. But does it work?

Dirac’s app allows you to instantly toggle the effect on and off and the difference is immediate and nearly always startling. This isn’t a demo where you have to go back-and-forth a dozen times, listening to the same passage over and over, straining to pinpoint a small or subtle difference. Rather it’s the audio equivalent of flipping on a lightswitch; one moment it’s dark and murky, the next it is bright and alive.

The improvements are readily noticeable each-and-every time regardless of the type of you music you prefer or the track you are listening to. Rock, jazz, pop, classical, hip hop…it doesn’t matter. Because the Dirac HD Player isn’t trying to add and equalization to the music, it is correcting the inherent flaws and limitations in the Apple headphones and making them as close to perfect as they can be. And in that state they will make *everything* you listen to sound better.

Listening to the EarPods without the processing engaged produces sound that generally sounds tinny, thin, and lifeless. Voices are often located directly in the middle of your head, lacking any width or space. However when the processing is engaged, the soundstage is instantly given a revelatory depth and width, and the tinny-ness is replaced with full-bodied, real sounding music. The processing actually infuses the EarPods with a soul. One that cares deeply about music.

The cymbal strikes in “All Blues” off Kind of Blue go from tinny and thin and indistinct to having sizzle, snap and texture. Unprocessed, Davis’ trumpet sits loose and vague in the center of your head, but springs to life with width and emotion once the processing is engaged.

The EarPods’ indistinct bass flabbiness is tightened up as well. Drum notes in Fiona Apple’s “Every Single Night” are far deeper and weightier, with each beat far more distinct. Her voice is also given far more weight as it resurrected from the Pods’ general nasal quality.  Removing the processing caused the auditory equivalent of opening a localized black hole, as all of the life is just instantly sucked out of the sound and you are back listening to music through what sounds like $9 phones.

The deep bass notes in The Crystal Method’s “High Roller” are virtually indistinct without the processing, making the raging drumline sound like it’s being heard through an Edison wax cylinder. Cymbals and high-hats and tinny and over emphasized, and the big drums are lost in the background. With the processing engaged it’s like you found the subwoofer volume knob and gave it a good tweak.

You won’t realize just how bad your EarPods sound until you toggle Dirac’s processing on and off a few times. It is the sonic equivalent of turning your speakers towards the walls and throwing a thick and dusty blanket over the top of them. Fortunately, once you’ve realized just how bad it can be, you can immediately improve it all over again.

And incredibly Dirac is *giving* this enhancement way FOR FREE! The free version of the app is called Dirac HD Player Lite. Download it, install it and play with it. If you love it – and you will – you will probably want to spring the $2.99 for the full version that allows you to import playlists, create playlists, search songs alphabetically and have shuffle and repeat functions. Sonically the free and pay versions are identical so you have NOTHING to lose and won’t be missing out on one scintilla of performance by giving the free version a try. (The player works with iPhone 4/4s/5 and iPod touch (4th and 5th generation) running iOS 5.1 or later.)

So, what’s the catch? Nothing really. Well, except these three things…

1: The correction ONLY works with Apple’s original earbuds and new EarPods. Once you experience what it does to improve these pieces of garbage free gifts from Apple, you’ll really wish that you could use it to bring the same level of correction to your favorite set of phones.  Seriously, though, even if you say that you’ll never-ever-NEVER use those headphones, it is worth the experience just to retrieve them from the back of that drawer and see what the app – and well-designed audio correction – is capable of pulling off.

2: The processing only works with the library of music stored ON the device; it won’t work with Pandora, Spotify, Songza, YouTube or any of that. It also doesn’t fully support (yet) iTunes Match and iTunes in the Cloud. And any DRM protected music that you purchased from iTunes isn’t supported either. So, the app isn’t a fix-all for everything you listen to (the way a great set of phones is), but works sonic magic on things in your music library.

3: It also doesn’t address the biggest limitation of the EarPods which is their not making a seal in the ear resulting in complete lack of any sound isolation and thus inability to reproduce really deep bass. Again, to achieve this, you are going to need to invest in a quality set of phones.

However for the many out there that ARE still using these phones, Dirac’s technology will enable users to experience audio in a way they never before imagined. If you give it a try, hit me up in the comments and share your thoughts!