Avatar does NOT equal all 3D

Admittedly, I’ve done my share of 3D bashing. In fact, one of my first posts on the subject was 3D: I kind of already hate you

which *pretty* much sums it all up. Then I pointed out that 3D kinda hates old people, babies and drunks.

But I still constantly hear people declaring their *love* for 3D. Usually it goes something like this. “Oh! Have you seen Avatar! Oh my, GOD! That movie! The 3D! It was so real! It was like I was there!” Then, depending on the person, this train of thought may carry on for quite some time with lengthy descriptions of how they want to move to Pandora, how they wish they were an avatar, how this world is really just a stinking sink-hole compared to Pandora, do I think it would be hard to learn to speak Na’vi, should they buy Avatar replica jewelry from Sky Mall, etc.

OK, here’s the thing. Avatar in 3D WAS awesome. It was. It was truly incredible. Unquestionably the definitive statement piece for 3D cinema to date. Anyone that is truly interested in movies or technology should consider viewing this film in 3D a pre-requisite. (Jeremy G and Julie J, seriously, can’t believe you guys blew this one off….) However, saying that you saw Avatar in 3D and that you now love 3D is a lot like saying, “I have only ever driven one car. That car was a Ferrari. All cars are totally awesome!”

Avatar was a (virtually) money-no-object labor of love by (arguably) one of the greatest film makers of our day. James Cameron poured his LIFE into this thing for MANY years. This wasn’t something that was thrown together over some beers in a few months. It wasn’t something that they decided to transform and 3D-ize AFTER they filmed it in post. This was 3D from the get go with ground breaking equipment, filming and techniques from a director that likely brutalized his cast and crew for every shot. Also, it wasn’t just some sucky movie that happened to have brilliant 3D applied to it. Call it what you will – Dances With Wolves in Space – but it had a pretty compelling story with terrific visual effects and non-George Lucas-ian dialog.

In short, Avatar does NOT represent the typical 3D experience. At best, other 3D movies will benefit slightly from 3D with some occasional greater depth, but they won’t really be enhanced by this added tool. For instance, Toy Story 3.  Again, this was a terrific story. (Pixar, I love you! Let’s take our relationship to the next level. Call me!) And viewing it in 3D definitely  added *some*dimension, where you could clearly see characters placement in the scene and some greater depth to each shot. But the 3D added *nothing* to the film itself. No part of the storytelling process really benefited by 3D. To the contrary, I was still battling that blurry-eye feeling every 10-15 minutes where I felt like I needed to take the glasses off and clean them. (Kind of like clearing your mask on a dive, except without the possible threat of drowning or shark attack looming over your head.) If I saw TS3 again, it would be in 2D and I wouldn’t feel like I was missing a single beat. Other films are actually ruined by the 3D experience. This is because the director or cinematographer didn’t know what the hell he was doing and the effect (pushing the Z-axis) is so poorly and over done that viewers wind up with horrible eye fatigue, headache and nausea. (If you haven’t read my piece on Sony making 3D less sucky, well, now’s your chance…) 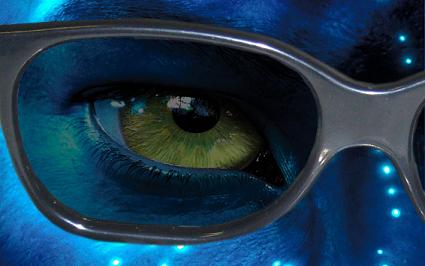 But, I wondered if Avatar would hold up the other way. Would it lose its Avatar-ness if it didn’t have the amazing 3D to fall back on? I had only seen it in 3D (twice actually; the first time the theater had some technical issues and they comp’d us a second viewing). So, when the S1 Digital movie server that I’m reviewing right now for S+V arrived with Avatar pre-loaded on Blu-ray, I knew that I was gonna be visiting Pandora again. So, we powered up the projector, lowered the screen and watched Avatar. And almost immediately, something was missing. One of my favorite shots in the film was the opening as they are all coming out of hyper-sleep (you *massive* Avatar fans will have to excuse me if I get some of the jargon wrong; it might have been cryo sleep or deep-space coma or something; I am specifically NOT looking this up to help distance myself from the already borderline geek level of this post, thank you very much) you get this MASSIVELY deep shot into the ship that just shows a huge amount of space and *feels* like you are looking into the interior of a giant space. In 2D, it just looked like every other space ship interior. I also felt that a lot of the effects looked way more CGI-ey in 2D. At times the digital characters looked placed into the real environments. Perhaps with the extra depth of 3D the characters fit their surroundings better, but here I was slightly pulled out of the movie thinking they were just computer people. The scenes where the little dandelion puffs fly around from Tree Mother (again, not looking it up!) were far more immersive in the theater, as the puffs broke the Z-axis and floated all around the characters. Also way less impressive in 2D was the curved video screens in use throughout the aircraft and mining company interiors.

So, I have to say that in my opinion, Avatar was a WAY better experience in 3D. In fact, you could say that 3D WAS the Avatar experience. Seriously, I doubt the movie would have done half the business it did had it been released as a traditional title. I'm not saying that Avatar minus 1 D would have equaled DUD, but I doubt that it would have had the cultural impact that it did. No one wouldhave been threatening to kill themselves because Pandora was so real and they could never experience it. No one would be wondering what crazy Avatar-connecting-your hair-braid-sex was like. None of it. And when Avatar finally makes it to the home in 3D next year, I think that will be the big push that will drive 3DTV sales.