I posted a story days ago about finding that thing which motivates you to do whatever it is that you do. Is it for the money? Is it for the recognition? Is it for some semblance of prestige? Or maybe it's to have some amazing experience.

I started counting down the best experiences that have been opened up to me since I started this whole writing thing starting with numbers 10 - 6 here, then 5, 4, and 3 here and then finally number 2 here.

So now you’re probably thinking, “What could *possibly* top a weekend with your personal Aston Martin plaything?” Oh, just this…

You want to talk about experiences that money just can’t buy? How about getting to do an arrested landing AND catapult launch from the deck of one of the most modern aircraft carriers! While it is underway! Yeah. The absolute AWESOME.

The idea for this story came from an e-mail from my cousin, Chris, who was deployed as a Navy SEAL in the Philippines. He mentioned that his team had watched the movie Blackhawk Down out in the field at a time when the movie had barely come out in theaters. This started me to wonder about the systems used to entertain troops while they are deployed abroad, and what kinds of cool electronics would be onboard a ship. And, if you’re gonna visit a ship, you might as well go big, so I inquired about visiting an aircraft carrier.

I made some phone calls, and eventually reached Naval Deputy Public Affairs Officer, Mike Maus. After several months of waiting with no word (one PR person I talked to said, “In case you haven’t noticed, we’re in the middle of a shooting war right now, and all of our ships are a little busy!") I eventually got a call with like four days notice. “Can you be at Norfolk Naval Base on April 15?” So I headed to Norfolk where I was informed that I would be flown to the suitably nebulous sounding “somewhere out in the Atlantic” to rendezvous with CVN75, the USS Harry S Truman.

Length: 1096 feet (as long as the Empire State Building)

Cabling and wire: More than 900 miles

Carry with them the seventh largest air force in the world.

Prior to boarding, you are given a serious, no-BS pre-flight brief that is something to the effect of, “Listen up, dickheads! This is no joke. You could seriously die if you don’t listen to me, remember every word that I am about to tell you, and then follow those instructions to the letter in the event of an emergency situation! The chances of us having to ditch the plane into the water are very real, and if that happens, you’re going to want to do EVERYTHING I TELL YOU RIGHT NOW!” Umm, aye-aye, sir! 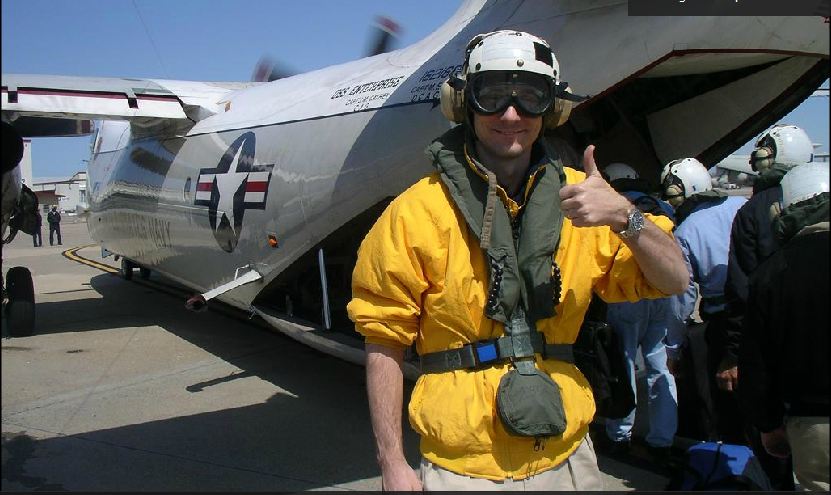 Suited up and ready to fly!

They gave us a helmet with eye and ear protection (called a “cranial") and a life vest.  While it was supposed to be comforting, it was actually rather unnerving that the vest contained a whistle, a chem-light and a dye marker “THAT WILL HELP THE RESCUE DIVERS FIND YOU! Break the dye, and start blowing your whistle! It could save your life!”   Primarily used for delivering mail and supplies to the ship, the C2A-Grehhound, the plane that delivered us to the Truman, had comfort as a very low priority in its design. First, you sit backwards in very upright, hard metal seats that are designed for crash survivability over ergonomics.  Second, it is very loud. VERY LOUD. Like yelling into the ear of the guy next to you to be heard loud. Third, visibility is nil since there are only two small windows, and they were both covered. Fourth it reeks of diesel fuel and grease and metal. (Funny story: On our in-bound flight was a group of Scandinavian dignitaries and their equivalent to the Secretary of Defense or something. Many of them puked because of the turbulence. Rather unceremoniously onto themselves or into giant Hefty bags. So, when we got off the plane, we were ushered straight into this formal reception with all these suit wearing foreigners in the captain’s private quarters and were included in this group photo and had a toast and were given Truman caps. When it was over our PR handler came over and said, “Umm, you guys aren’t supposed to be in here. We need to leave. And you’ve got to give the caps back.")

One of the things that made this trip so great what that I got to meet a wonderful photographer, Jim Raycroft, who was every bit as much into the experience as I was. We would just stop at points and look at each other and say, "Man! Can you believe this?! This is SO awesome!" He took some amazing pictures and was totally up for whatever ideas I suggested even though he spent the entire trip having to lug his gear up and down narrow stairwells and corridors.

The Navy treated us wonderfully, showing us amazing respect and giving us VIP (technically "Distinguished Visitor") treatment and taking us practically anywhere on the ship that we wanted to go. (The reactor and weapons rooms were off limits. And kind of tough to think of a reason why my story on the ship's entertainment systems would require a look at the twin nuclear reactors or Tomahawk missiles.) We visited the captain up on the bridge, got to look in the Combat Information Center (CIC), got to watch night flight-ops, and got to stand ON the deck about 20 feet away while they recovered and launched F-18’s. The cable (technically "arresting wire") they use to catch the planes is like 8-inches in diameter and crazy heavy. They use each cable for 50 catches (or "traps") and then chuck it overboard. A cable breaking is like mega-bad juju, and it can cause a plane to pitch overboard or cut a man in half. So, the kind of thing you generally want to avoid.

Standing on the Truman's flight deck with photographer, Jim Raycroft.

During our stay, the ship underwent a General Quarters simulated Chemical-Biological-Radialogical attack and for like an hour we were the ONLY people on the ship that weren’t wearing gas masks and protective gear. And even though you mentally know that you are just off the coast of the US and not under attack, it is still pretty unnerving when you are the ONLY one not suited up. Definitely felt the whole follow-the-herd, want-to-fit-in, I WANT TO LIVE! mentality!

The entire experience was amazing and was truly a once-in-a-lifetime kind of deal. I know several people that have been in the Navy and even served on carriers that never got to experience an arrested landing or being shot off the cat. As much as I loved doing the story and was happy with the way that it turned out, I had really hoped that the story would resonate with people and that it would get a lot of positive and interesting feedback. But, sadly I didn’t hear one single comment. Now's your chance to right that wrong!

Click here to read my original story published in Sound + Vision from 2004.